Let's face it, one of the biggest mistakes you can make is not creating videos because you think you're no good on camera. Maybe you're a perfectionist, or you hate those um's and those uh's. Or maybe it's the way you look, you just don't think you communicate a charismatic, professional or credible vibe. Or maybe you're just worried about what people say. Some people just cringe and go off to dig a hole at the sound of their own voices.

Does any of that sound familiar?

Well, guess what Angelina Jolie, Johnny Depp, Nicole Kidman, Reese Witherspoon and Harrison Ford all have in common? They all hate to watch themselves on camera. Harrison Ford has never seen Indiana Jones. Now that's crazy. He's definitely missing out on a great film!

"I can't watch myself, I don't know who feels good looking at themselves. It's torture."

Yes, it is. And I hate it too. But it doesn't mean we should let it prevent us from creating videos, sharing our knowledge and experience with others, and marketing our businesses.

The benefits of sharing your stories and your content will rapidly outweigh the worry about what people think about you, about your performance, and so on. And guess what it doesn't have to be a stressful Facebook live video or one off those mobile personal vlog style video.. There are a number of different less stressful formats you can get started with...

It might give you confidence to know that almost everyone starts out feeling rubbish on camera. If it was something we were good at we'd probably be presenting Countryfile or Blue Peter? But most of us doesn't become presenters.

Everyone starts out making mistakes so now is the perfect time to get started (while everyone is still creating cringe worthy videos). The sooner you break through that initial cringe factor, the sooner you'll take your business to the next level with video. It will be worth it. Social video generates over 1200% more shares than text and images combined. The potential for businesses using video is endless.

You can hire a video production company or you can do it yourself. The key thing is to do it... (sorry, I know you've heard that 100 times).

If you look at professional ‘guru-like’ marketeers capitalising on videos at the moment, none of them are amazing at presenting, whether it's Frank Kern, Ryan Deiss, Neil Patel, or even Gary V. They all started stuttering and fumbling just like anyone else. So if you want to know how to overcome the fear of camera, let me share some hacks that you can really use to get started.

I'll just give a short disclaimer that I'm by no means am I a presentation expert, guru, mentor, or anything like that, but as a video producer for the last 15 years, I have interviewed 100s of business owners, CEOs, managers, entrepreneurs that really hated being on camera. So I have quite a bit of experience working with people who feel, probably, just the same as you do.

1.Preparation is key. You must know ahead of time what content you want to deliver. Either have notes or bullet points. Some people place the notes next to the camera or you could have someone hold up a sheet of paper with your points. It really helps to break up the topics you want to talk about into small chunks so you don't try to remember long pieces of information. I wouldn't learn anything off by heart because that would be crazy and very rarely have I ever seen anyone deliver something on camera that sounds good that's been memorised verbatim. To be honest, it always sounds a little bit robotic.

2. This next method is one I use quite a bit when I'm filming people that really struggle talking directly to camera, which can be tricky, but what I do is I ask them to look to the side of the camera, as if you're being interviewed - pretend that there's someone asking them a question off camera and this is generally much, much easier than looking into a cold, round lens. It also feels a lot more natural, of course, if you can place someone just to give you an eye line and then get that person to ask you questions. That's really how it works best. Then it feels more natural and you can really deliver content as you would in an interview.

3. If you think you don't look good on camera and you're just a little bit self conscious, it's worth investing in a videographer or hiring a video production company to film your videos. A lot of the time, people look terrible on camera simply because of bad lighting and also because of bad framing. Get these two completely wrong and you could be looking at something from a horror film that actually misrepresents the reality of how good you look. Hiring a freelance videographer or video production company can be great in giving you amazing feedback about your presentation, about your speaking, which is really helpful.

4. Okay, so this is another method I've seen work really well and I've also used it before. Visualisation. All you need to do here is simply write down your key points, remember them off by heart, just the key points. Next, you simply visualise, with your eyes closed and picture yourself delivering the content. Remember to do this as if you're looking at the camera through your own eyes. Not watching yourself from a distance. That's something else. Now this can be tricky at the beginning, but once you get the hang of it and you manage to get through all your content in your head, it tends to be much easier on camera.

Try it, it really works. It's also useful if you need to do some public speaking. Another mind trick method to calm you down and help you get into the right state so you feel relaxed speaking on camera is to place a picture of a friend or family member next to the camera. Then literally, pretend you're speaking to that person. I found this method online. I haven't actually used it, but I know people that swear by it. Definitely worth a try, just make sure it's a family member you like, not your mother/father-in-law or someone like that.

5. So if all has failed and the methods I've mentioned up till now still have not convinced you that you can speak on camera, here is my secret weapon. The teleprompter. Now, the teleprompter is very handy in that you just read from a screen that has a reflected mirrored text from an iPad and there are lots of different versions, but that's kinda the concept, the text runs in front of you or in front of the camera so it looks like you're talking to it like news presenters.

For some, this works really well and I've seen it. I've seen some great results, but for others it can actually work against you, as you will be acting, in essence, and if you're not the best actor, it can look very kind of cardboard or unnatural and it might seem obvious that you're reading from a prompter. It doesn't always matter. For example, if it's an academic tutorial, it’s no a big deal but it really depends on your content, your audience, and your objective. I'll just mention that when I’m on camera I use a mix of prompter reading and notes and that's what works for me.

So that's it. The most important thing to remember is practise. Like everything and like everyone that starts with video, you will improve with time. Now speaking on camera is great, but it's just one key aspect of the video creation workflow. There is so much more to making videos, from content creation to filming, sourcing videographers or video production companies, editors and so on. If you want find out how to get started with video for your business get in touch for a short chat.

Videos Are Great For Business and Here Are The Ones You Should Be Making!

If you're not seeing any results with your video marketing...You're Probably Creating the Wr

Why we've gone Green Screen and you should too!

Videos Are Great For Business and Here Are The Ones You Should Be Making! 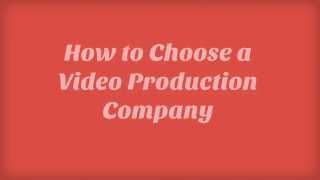 Looking for a Video Production Company?

If you're not seeing any results with your video marketing...You're Probably Creating the Wr

Why we've gone Green Screen and you should too! 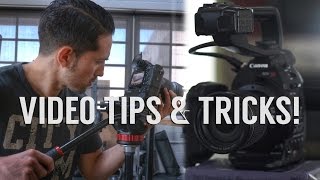 Video Tips and Tricks - this video is a good one.

Crowdfunding Videos: There is one thing you must do...

Filming Your Own Kickstarter / Indiegogo Video? Make sure you get the right kit.